“As a Maya woman, the world around me has always revolved around nature and its energies, which are the pillars to sustain mother earth.”

Aurora Garcia Saqui is one of the famous Garcia sisters. She is a proud Yucatec Maya who is well known for practicing and safeguarding her Maya culture through innovative ideas.

Aurora Saqui was born on June 13, 1967 in San Antonio, Cayo District.  Growing up on the family farm, “Arbolito” in San Antonio, along with her parents and siblings Mrs. Aurora heard legends of the gods and Maya culture but never thought how her culture would influence their lives. It all began in 1981 when Mrs. Aurora was working on the land at the farm with her siblings and discovered a slate stone. It was that finding that inspired and resurrected the ancient Maya custom of slate stone carving and became a family business known as “The Garcia Sisters Art Gallery and Museum” which has received national and international recognition in magazines and travel guides for their slate stone carvings. A piece of their art can be viewed at the Smithsonian Museum.

Safeguarding and promoting the Maya Culture:

While growing up and focused on her art, her great uncle, the famed traditional healer Don Elijio Panti, encouraged her to become his apprentice and over thirteen years he conveyed on her his vast knowledge of the medicinal plants in Belize. Just before he died, he bestowed upon her the responsibility to carry on in his footsteps and to share whatever she learned with her people. At the age of 24, Mrs. Aurora married Mr. Ernesto Saqui, and moved to the village of Maya Centre in the Stann Creek District. Today, Mrs. Aurora, an active cultural activist; has a four-acre botanical garden and medicine trail. She also offers Maya spiritual blessings, prayer healings, acupuncture, massage and homemade herbal remedies at her clinic, the Hmen Herbal Center where she passionately empowers and inspires the healer within all. She is also very committed to promoting cultural traditions through presentations which include: traditional cooking demonstrations, seminars on herbal medicine and ceremonial rituals. Also an innovative artist Mrs. Aurora produces clay masks, basketry, fine jewellery, and other crafts. Presently, Aurora and her family accommodate guests and operate the gift shop at Nuuk Che’il Cottages in the village of Maya Center.

Aurora and her elder sister Maria Garcia, have worked very hard to convince the government to protect over 12,600 acres of land. This is the area where her great uncle and mentor Don Elijio Panti, would venture to get his plants, so it was her mission to protect this land to preserve the medicinal plants. 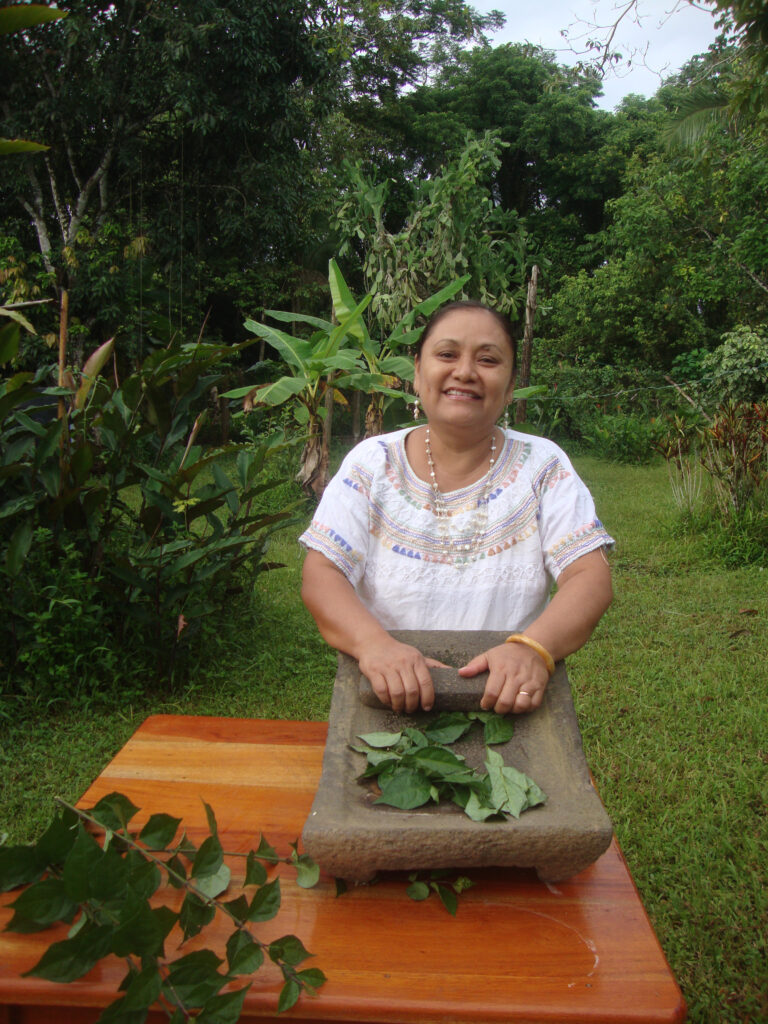