Estelle Ramclam is a proud descendant of the East Indian Culture in Belize. She has taken every opportunity to showcase East Indian Heritage and culture mostly through her cooking and displaying her collection of traditional tools and utensils.

Estelle Therese Ramclam was born on December 16, 1949 in the village of Eldridgeville, Toledo; known as Rancho at the time. She was the 8th child of Mr. Rueben Jacobs and Marceline Jacobs (now deceased). Ms Estelle, Lived in Eldridgeville with her family then moved to Belize City in 1979 to pursue a new way of life.

In 2001 Estelle Ramclam affectionately referred to as Ma by many patrons ventured into the restaurant business with a strong desire to promote East Indian cuisine.  She started the popular PG Kitchen located on Freetown Road. The Excellent cook that she was, brought many to her kitchen. Her menu included local Belizean cuisine more so traditional East Indian tarcari dishes such as Cohune Cabbage, Roti, Tarcari dishes from Fish, chicken, pork and game meats. Included also are the side dishes of sorosi, calaloo and any green leafy, sambee, yard beans and some type of chutney or choka.  The food was in high demand that if one did not reach in time or call ahead of time, all food would be sold out.  This proved the mettle of her life as she was never one to sit down and let life pass her by. Estelle also used this opportunity to educate people about the benefits of our staple condiment yellow ginger (turmeric); its many uses for maintaining health. She would give out free samples of our various dishes more so the seasonal produce so as to sensitize people on the various ways these foods are prepared and how they can be served. In 1979 Ms. Estelle passed on the responsibility of PG Kitchen to her daughter Annette and moved on to briefly operate the Saffron Bay Restaurant (with her other daughters Daisy, Liz, Sharon and Marva)) on Seashore Drive in Buttonwood Bay where she continued to serve East Indian cuisine. Her legacy lives on through PG Kitchen where we continue to serve our popular East Indian cuisine as part of the daily menu. 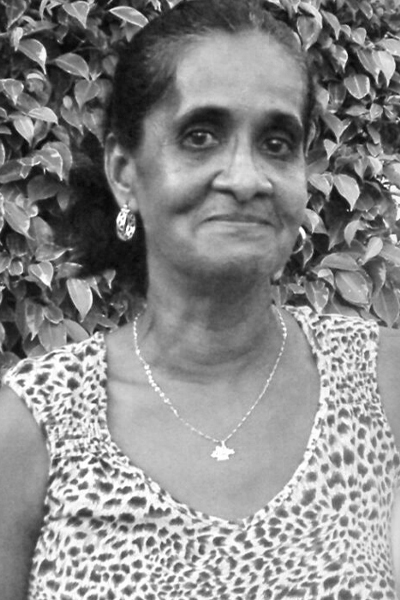