“Fusing our past with the present enhances our existence”

Sylvia Gillhary Perez (1947) is well known among the East Indian communities locally and abroad. Throughout the years, Mrs. Sylvia had strived to recapture the past, and promote and safeguard the Indian heritage through various activities such as cooking, storytelling, pageants and dancing summer camps to mention a few. By embracing her cultural heritage, she continues to give voice and visibility to east Indians in Belize.

Sylvia Perez was born on June 7, 1947 in the small East Indian village of San Antonio, Corozal District. Her attachments to farm life and involvement with her chores in the kitchen, garden and farm kept her closely in tune with her cultural background. She received her teacher education diploma from the Colegio Vocacional de America Central in Alajuela, Costa Rica, her Bachelor’s degree in Secondary Education in English from the University of Belize and her Master’s degree in Educational Leadership from University of North Florida, U.S.A.

Sylvia is now a retired Educator who represented teachers at the national and international levels and also served on the District Educational Council of Belize prior to retirement. Now she dedicates her services as the President of the Corozal Organization of East Indian Heritage (COEICH) and is also a Justice of the Peace for Belize.

Sylvia Gilharry Perez is the founder and president of the Corozal Organization of East Indian Cultural Heritage. She founded the Non-Governmental Organization to resurrect her East Indian culture for the betterment of the whole society and to recapture her fast fading East Indian culture. In 2013 in order to have the involvement of youths in embracing their culture Sylvia Perez organized the First Miss East Indian Pageant which has become a highly successful event. Sylvia has managed to display Belize on an international stage at the annual pageant that takes place in Trinidad and Tobago. Working at COEICH has also seen Sylvia actively involved in recruiting instructors from Trinidad and Tobago to come and give workshops on dance and cuisine. The Masala Dance group is one successful outcome of those workshops. She has also spearheaded the first International Indian Diaspora Conference in Belize in August 2014, and participated in international fora and conferences where she has been able to network with other cultural organizations to help in the promotion and safeguarding of the East Indian culture.  By embracing her cultural heritage, she helped to give voice and visibility to East Indians in Belize. She has also worked for over 40 years as an educator, represented teachers at the national and international levels, served on the District Educational Council of Belize and chaired her village Council. 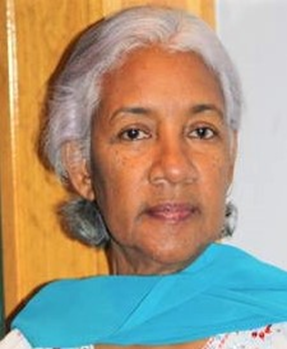